After building the JS pedalboard, I ended the launch post with an ambitious stretch goal:

A loop pedal would also be incredible.
But who knows.

After a Saturday of hacking, I’m pleased to say the loop pedal is alive and working! It’s all based around the fantastic, but relatively unknown MediaRecorder API.

Try the pedalboard out for yourself!

Here’s a diagram of the audio routing in the for(loop) pedal: 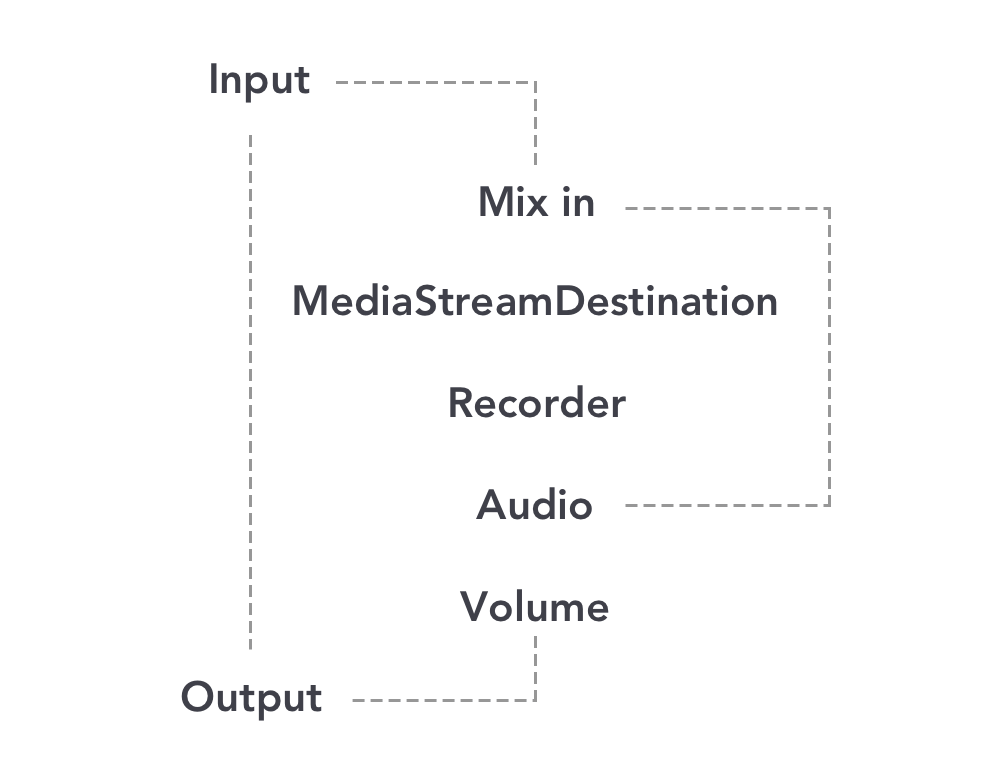 The initial plan was to use the loop attribute on the audio tag, which worked well till overdubs came into the picture.

As the audio is sent back into the ‘Mix in’ node, the recording part of overdubbing was surprisingly simple. But it turns out timing the dub is considerably more complicated that recording an initial loop. To simplify things, I opted to only allow overdubs over a full loop length. Once a loop is recorded, clicking the loop button again will prepare the looper for more recording, but will only trigger when the loop comes around again. When it gets to the end, the recording phase ends and we go back to playback mode. In theory, this can be done as many times as you like!

When using the loop attribute, the audio tag never sends an ended event. There is a timeupdate events that appears to be pretty consistent in sending an event at 0, but I thought it better to ditch the attribute and listen to the ended event. Then I could immediately call audio.play() again. This didn’t appear to make any difference to playback, it’s practically instantaneous. I could then hook into the event to start/stop the recorder, and switch the ‘LED’ colour.

The other stretch goal was to add some animations to the pedals, and this seemed like the perfect opportunity. I’ve mocked the pedal to look like a little cassette deck, complete with playback heads and spinning tape! A bit of border-radius: 100% 95%; and infinite rotation on the tape produced a pretty neat effect.

In the spirit of ‘always on’, there is no on/off switch for this pedal, this did mean re-doing the DOM code for it. I haven’t refactored the DOM code just yet though - that might come if another always-on use-case arrives.

MIDI control as a must, as seen by the video. It works in the same way as outlined in the first post.

And yes, for(loop) was the best name I came up with! Please have a play and let me know what you think!

Try the pedalboard out for yourself!
Posted on 13 May 2019 in Web